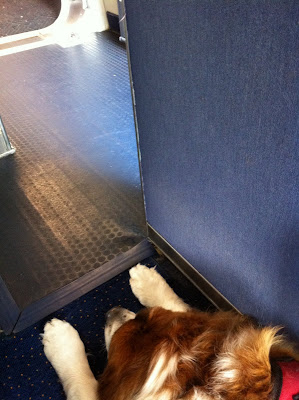 People are often curious about the process of traveling with a service animal. Since Phoebe is a working dog as opposed to a pet, The Americans with Disabilities Act allows her to accompany me in the cabin and sit on the floor by my feet. We travel often, and so far, flying with Phoebe has been pleasant and, at times, kind of wonderful.

Phoebe’s first flight was in June of 2008. After training together at CARES in Kansas for two weeks, I took my bear-dog home to Los Angeles where we would start our lives together as woman and dog. She didn’t know what to make of the whole mess, at first, but soon, after being showered with kisses from flight attendants and delicious treats of the rawhide persuasion, she quickly warmed up to the strange metal tube in the sky. Every time we fly, I reward her good behavior with the holy grail of dog treats: The CET chew. Judging by the abundance of preflight tail wagging, I'm fairly certain Phoebe thinks that planes are magical CET chew factories built for the delight of good dogs. 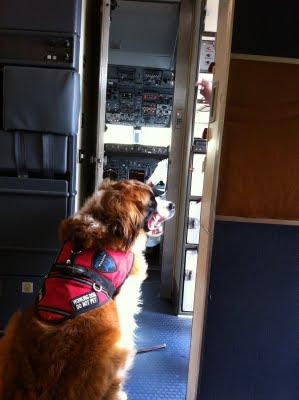 Traveling with Phoebe, I imagine, is a lot like traveling with a baby. You need a system when traveling with a dependent, a plan of action that allows you to keep your sanity and sail through the process as quickly and as painlessly as possible. Here is our system. I call our system, “Our Great Travel System.” I like to come up with creative names sometimes.

1) When traveling with a service dog, one must always allow time for a preflight bathroom break. No one wants a St. Bernard taking a dump in the aisle of an aircraft due entirely to poor planning.
2) Keep your service dog ID handy.
3) When making your way through security, request a pat down for both human and dog. It’s faster and easier than walking through the scanner a bunch of times, only to be told you need a pat down because your port-a-cath and your dog’s vest are ringing off. Timesuck City, USA.
4) Carry Greenies Pill Pockets at all times; a couple of Benadryl right before boarding help keep puppy’s ears comfortable during takeoff and landing.
5) Allow other passengers to deplane before exiting the aircraft. It’s less stressful to gather your things and collect your dog and schlep out the door with ten pounds of crap when you don’t have a long line of people trying to squeeze by you.
6) And finally, make sure that dogface drinks plenty of water post-flight, as airplanes are just as dehydrating for dogs as they are for us. Also, run/hobble like the wind and locate a dog bathroom.

Speaking of airport things, Phoebe loves her some pat down. The last time we were at LAX, the TSA agent looked at her and very seriously explained the procedure. “I’m going to go ahead and pat you down, now,” she said, before before gently lifting one floppy ear at a time and using the backs of her hands to pat her belly. Phoebe stood there like a Berenstain Bear, blissfully grunting as agents commenced full doggy pat down. She ended up rolling completely over onto her back, arms and legs in the air like a great big old whore. She was their happiest customer that day.

A few months ago, as Phoebe and I settled in for a long flight, a man boarded the plane and asked if he could sit next to us in the bulkhead. It wasn’t a full flight, so I suggested he might be more comfortable in a seat that wouldn’t require him to share his foot space with my bearpony, since he didn’t have to. He said that he had never flown on an airplane before and he was a little nervous, and it would really help him to sit next to Phoebe and talk to her. I told him that was just fine. And so he sat, nervously twiddling his thumbs and sweating like an overheated Top Chef contestant as the flight attendant went over emergency protocol. Right before takeoff, without any prompting from the man, Phoebe reached up and put her hand on his knee, as if to say, “There, there, fella. It’ll be okay.” He held her hand for the majority of that flight, talking to her, petting her, projecting messages of reassurance meant for himself. When we landed, the man patted Phoebe on the head and let out a sigh of relief. “We made it,” he said with a smile. That day, Phoebe helped a weary traveler learn to fly. It occurred to me that she is a stability and balance dog in more ways than one. 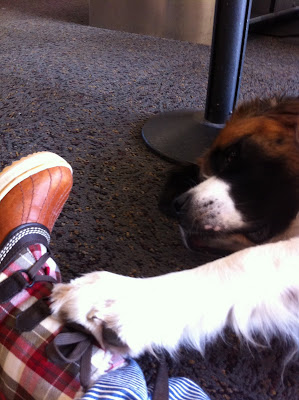 My mom was a flight attendant for seventeen years, back in the day when flying was a pleasant experience, a special occasion. In those days, for the most part, terrorists were bad guys in movies, elderly people in wheelchairs weren't subjected to body searches and wide-eyed children were given wings and invited to visit the cockpit before takeoff. Nowadays, you show up to the airport two hours early and are immediately greeted at the curb by airport police who expect you to tuck and roll out of your moving car like a freaking ninja because “OMG NO STOPPING.” After escorting your own checked bags to the checked bag island of bags, you stand in a line that stretches ten city blocks and wait your turn to be groped and radiated and finally packed into a crowded plane like a nameless sardine. People dress like dirty laundry baskets and paranoia takes hold every time a passenger walks toward the cockpit door en route to the restroom. If I had been alive in the good old days, I would miss the good old days. That said, it’s not all bad. Phoebe makes the whole process of flying a lot more bearable. I love to watch grumpy, sleep deprived businessmen light up when they see her. She acts as a catalyst for human connection and after a few minutes at our gate, strangers become friends and frustrated travelers slow down, if only for a moment, and smile. Times like that, I feel lucky. Like I’m witness to some kind of magic. 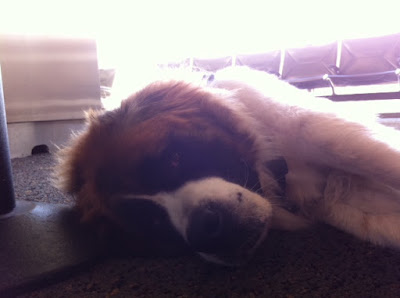