Years ago, Phoebe and I were approached by an old homeless man outside a movie theatre. He knelt down and looked into Phoebe's eyes for the longest time. She looked right back at him, strange, as she usually goes to great lengths to avoid eye contact.

"I remember you, girl," he said, his eyes wide with recognition. "From back home. We were good friends, a long time ago."

Phoebe nudged him as he leaned forward and whispered something in her ear. She listened, and before the man got up to leave, she rested her paw on his wrinkled hand and let out a long sigh. He smiled and looked up and me.

He struggled onto his feet and made his way down the sidewalk, turning back once or twice to wave to his old friend. Phoebe watched him until he disappeared around the corner. I couldn't help but feel I had witnessed a magical reunion of old souls, lost friends from another time coming together at long last. Maybe he really did know Phoebe in another life, or maybe he was confused, lost in an imaginary world that none of us could see. Maybe it doesn't matter. In that moment, he believed, and he was happy. 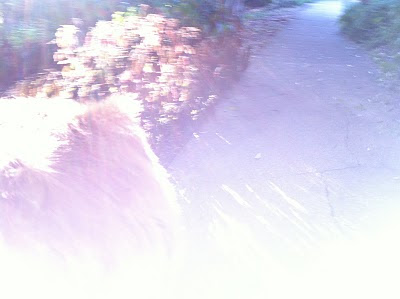