It Was All Up to Me to Decide

Four years ago today I graduated from high school in Leawood, Kansas. I was still in a wheelchair, still ghostly pale from six years in the dark. I dyed my hair black and got a tattoo and tried with all my might to make up for lost time and to join my friends in their teen rebellion. I had seen so much and experienced things that most people never do, yet my naivety to the ways of the "real" world, the "healthy" world, became painfully obvious when I moved to Los Angeles. I knew how to access a port-a-cath yet I never learned how to parallel park. I could rattle off the unsafe list of medications for porphyria patients in my sleep but I didn't know how to pay a cable bill or use a coin laundry machine. I was determined to learn everything that everyone else knew as quickly as I could. To be normal. To pretend that they last six years had never happened. I was in such a rush to play catch up with myself that I missed the opportunity to sit back and enjoy being alive and mobile and to take it all in.

I used to have a website called We All Have Stories. It provided me with an outlet to vent about crappy nurses and bad stomach pain and missing out on things like prom and learning to drive and other teenage crap. Last fall I was reading over some of my old entries and I found some letters I had written to myself about my uncertain future. After reading them I decided to write a response to myself, four years older and maybe (?) a little bit wiser.

My old writing is in italics. Whoomp, here it is.

It’s been four years and I have some things to tell you.

Two weeks ago I wiggled my toes. I've gotten better at it, too. At first it would take me ten minutes just to move a toe. Now it’s a matter of seconds. It's the craziest feeling ever. Crazy, awesome, amazing, mind-blowing. The other night I made my thigh and the top of my foot move. Not just the toes- the foot. I am going to walk again. There is no doubt in my mind.

First, you walked again. You went to therapy every day and you worked with Brendan and April and they helped you. You had lots of surgeries and injections and treatments and now you can walk pretty much like a normal person. Some days the Tiny Tim limp is worse than others, but it’s okay. You’re so much better than you ever thought you could be. Sometimes you have panic attacks because it all catches up with you. It hits you that you’re not in bed anymore and the world suddenly seems really big. It feels like you’ve tripped and you’re falling down really fast and no one’s there to catch you, like when you used to run up the stairs and you’d miss a step.

Sometimes I get scared that the past few months have been a dream and none of what has happened is real. It's an amazing feeling to know that you have a future. To know that you can be happy. I realize I see the world the way a child does. Like everything around me is a miracle. As ridiculous as it seems to marvel at a tree swaying in the wind or at a mother holding her little girl's hand in a grocery store parking lot, I can't help it. Everything old is new again.

After you learned to walk again you moved to Los Angeles. Remember when you were in the hospital and you’d make mom go to blockbuster and rent like 8 movies for you at once? You’d fall asleep to Butch Cassidy and the Sundance Kid and you memorized everything, every line, every shot, of Badlands. Now you make movies and you write stories and it’s the only thing that you want to do for the rest of your life. You’ve found your passion and for that, you are blessed.

A couple of weeks ago I ate my first meal at the first restaurant I had been to in over four years. If you ask me, taste is kind of a miracle. Even if you don't ask me, I'll tell you. It's a miracle. As I ate salmon and pie and partook in enjoyable conversation with my best friend, I thought to myself, "Oh, yeah... THIS is what it's like to be alive." I'd almost forgotten. Almost.

I think you should know that what you’ve been through with your illness is really hard and I know that you’ve suffered a lot. But here’s the thing that I think you should know: It only gets harder. Life. It’s not easy and you’re not exempt from the “regular person” hard stuff just because you’ve been through hell. I know a part of you thought that God was going to wave a wand and grant you a trouble-free existence, but that’s the Brothers Grimm version of your story. It isn’t real.

I'm real again. Not that I was fake before, but I didn't feel like a real person. I felt like a shell of the person I used to be. A shadow in the dark. It was like I was watching life on a 5", black and white television and nothing was on the screen but static. Now, I'm not watching life. I'm living it. I'm experiencing it. I'm tasting it.

There are a lot of things that you aren’t going to know how to do. The thing about missing ages 14-20 is that you miss a lot of experiences that help you to grow up. You learn how to say “no,” you learn how to fight with friends and stand up for yourself. You grown into your own skin and you learn to like it. To be comfortable with it. To own it. The thing that you missed out on was growing up. Overnight you went from healthy to sick, just as overnight you went from little girl to grown up. You fell asleep and you woke up different, like Rip Van Winkle. Sometimes you’ll get confused when the check out guy at Gelson’s calls you “ma’am.” You’ll look behind you, thinking he’s talking to someone else because who calls a 14 year old “ma’am?” But you’re not 14 anymore. You’re all grown up.

I believe in the existence of God. A higher power. Something bigger than us. I believe in fate/miraculous occurrences rather than coincidence. I believe that God, (he/she/it), provides us with the strength we need to survive difficult times in our lives.

The world is full of wonderful people. You’ve been fortunate enough to meet many of them since you’ve moved to los angeles. But there’s a lot of bad, too, and I want you to know that some people will hurt you if you let them. Don’t let them. Be strong. Be you. The wonderful thing about surviving what you have, about cheating death, is that no matter what you face in the future, you can face it with confidence because you know that you can do anything. You can beat anything.

That’s all I wanted to tell you. Don’t get so used to your good health that you take it for granted. Remember the fight. Remember the newness. And if you remember nothing else, remember the love. 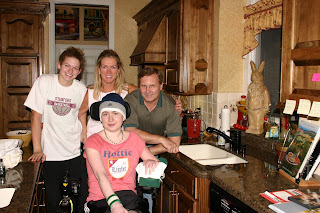