My Life as a (Service) Dog (Owner)


I feel the need to apologize for the title of this post. Like I kind of want to change it but I'm not going to.

Hi! I'm Lauren, and I used to be paralyzed. My teen years were spent in bed, fighting for my life, and later unexpectedly learning to walk again. Ah, adolescence. Nowadays I live in sunny Los Angeles, the natural choice for a pale, sun-sensitive porphyia patient like moi. I moved here from Kansas City after I learned to walk again to pursue my dreams of caregiving for an elderly woman... Er, directing and screenwriting. What a funny slip of the tongue! Anyway, even though I can walk now, which is great, I still deal with a lot of health stuff. Last September I had a big leg surgery that used metal rods to straighten/strengthen/correctly align my bone and put my hip joint into a better posish. That's short for position, only it sounds cooler because I abbreviated it. I go to physical therapy four times a week and to my hematologist once a month for blood treatments. I have a great deal of arthritis in my joints and I lack cartilage, making walking often painful and always difficult. Because of my differently-abledness, I have a mean limp. Think Carrie Weaver in E.R. meets Tiny Tim in the version of A Christmas Carol where he limps the most. I think the one with George C. Scott. Now, I know what you're probably thinking: "Blah, blah, blahhh, my deformed legs don't work and I talk about medicine a lot. Could this diseased freak just arrive at her POINT already? GOD." Well, to that I say the following: First, ouch. Secondly, here is the condensed version of my story.

Last year I applied for a service dog to help me with my assortment of post-paralysis leg problems. I was accepted into a program in Kansas run by CARES, inc. and I travelled to good old Concordia to meet my new omg bff. And meet her, I did. We were introduced to our dogs on the second day of class. One by one, fifteen people from all different walks of life, afflicted with all sorts of illnesses/injuries/disabilities were introduced to their dogs, and one by one their lives were changed for the better. When it was my turn, one of the head CARES honchos brought out my Phoebe dog, a long-legged Saint Bernard with the sweetest face since sliced bread. We just kind of got each other immediately and I soon realized how much Phoebe and I had in common. We both enjoy tummy rubs and plain yogurt with our breakfast. We both nap a lot and hate hot weather. We both roll around in poop. Ha ha, just kidding. I don't nap that much.

Being a certified assistance dog, Phoebe specializes in stability and balance work. She heels on my weaker side (my left) and allows me to lean on her for support, sort of the way I used my forearm crutches, before. She is trained to help me up and down stairs (a big issue for me,) to pull my wheelchair when I'm in it and to do what is called "bracing," a move that allows me to use Phoebe for support as I transition from sitting to standing. She goes with me everywhere and is allowed full public access under the ADA (Americans with Disabilities Act.) Having a service dog of any kind can sometimes attract a certain amount of special attention, but having a breed that people don't see very often and nostalgically associate with the movie Beethoven... Well, let's just say I have some stories.

That's why I decided to start this blog. Every day with Phoebe is a new adventure, a new story, a new chance to educate and explain to someone why they should never, ever pet a working dog. Our stories are just too absurd not to share. I mean, really. 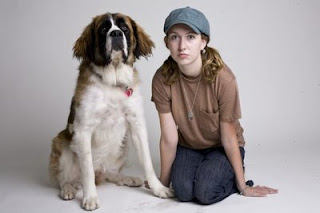